Fancy a taster of what you can expect from my recently released book, “The Vital Edge”? Have a look through the attached presentation to see what topics are covered and which sports people feature. If you have already purchased the book, many thanks for doing so. I’d love to hear your thoughts and comments on the subjects raised in “The Vital Edge”, either by leaving a review or rating on the Lulu.com site or here in the comments section of this blog.

The Vital Edge from Louis Collins

As the London Olympic Games draw towards their close, it has been exciting to watch records tumble and barriers being broken. Of course, not all barriers are measured by distance or by the clock. Some of the most fascinating are psychological barriers.

Andy Murray appears to have broken a personal barrier in winning his Tennis singles gold medal. Regular readers will have read Learning from Wimbledon a few short weeks ago which described the progress Murray was making with his Inner Game. At the Olympics he buried the anguish he experienced a month ago, by defeating two of his fiercest opponents in quick succession, something he has found tough to do previously. He played unbelievably well, out-hitting, out-moving and out-thinking both Djokovic and Federer. A huge breakthrough, which may well see Murray move on to achieve much more success in future championships. .

Michael Phelps broke the barrier of all-time most decorated olympian – 22 medals – 18 of which are gold. This is a phenomenal achievement, even in a sport that provides more opportunity than most to multi-event. Phelps has set the bar at a new height for someone else to emulate in years to come.

Oscar Pistorius broke a barrier of a very different kind, becoming the first double amputee to ever take his place in an Olympics starting line up. He qualified from his heat to reach the semi-final of the 400m. A remarkable story which has cleared the way for future paralympians to stake their claim to be able to qualify for full olympic participation. New barriers will no doubt have to be overcome, but Pistorius has shown it is possible. 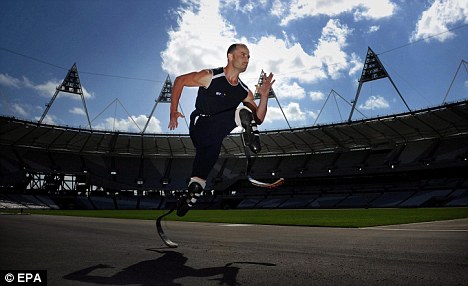 Some barriers are broken with increasing regularity, most notably in the swimming pool and in the velodrome, the latter no doubt assisted by advances in cycle technology. Others stand defiantly unobtainable, such as the long jump record which has stood for over 20 years. What fascinates me most of all is the psychological nature of breaking barriers.

Perhaps the best known example of this in the sporting arena is that of the mythical 4 min mile ‘barrier’. Until 1954, many actually believed that it was impossible, and perhaps even dangerous (or fatal) for anyone to run a mile faster than 4 mins. Roger Bannister became the first to make the breakthrough, and opened the floodgates for many others to do the same very soon afterwards. Soon the record was being broken over and over again. Those people who were soon running sub-4 minutes on a regular basis, were clearly physically capable of doing so, in the same way that Bannister did. The barrier they broke was inside their head, not on the track.

Running the 100m had a similar ‘magical’ barrier for quite some time. Once 10 sec was broken by Jim Hines in 1968, many others soon followed. The 100m final at this week’s Olympics was won by the extraordinary Usain Bolt. Had Asafa Powell not pulled up with an unfortunate injury, there is no doubt that every runner in the race would have gone under the 10sec barrier.

No-one has yet gone under 2 hours for the marathon, but it is getting closer with the current world record for men standing at 2hr 03min. It will be fascinating to observe how long it takes for the first person to run 1hr 59min 59sec, and how long afterwards we have to wait to see that time further reduced.

What is going on with these symbolic barriers, and what learning can it provide for other areas of life? In business, when people say it’s impossible, do they simply mean it’s not been done yet? Does it mean that END_OF_DOCUMENT_TOKEN_TO_BE_REPLACED

The entire world is grappling with extraordinary disruption as a result of the coronavirus and every one of us, in on our own unique way, is on our own volatile and uncertain change journey. While it is totally natural to feel anxious and concerned, there is also opportunity in every crisis.

How can you use this time to step back and reflect on where you are going? Can you use the time to plan for the future? What can you learn about yourself from your own reactions to the situation? Can you get yourself more grounded or more organised?  Can you develop yourself and learn new skills that you have been putting off because you never have the time? How can you thrive in this new reality rather than getting mad at what you have lost or being scared by an uncertain future?

There’s never been a more important time to take stock of where you are, and where you going, than NOW!  Act now and benefit from professional coaching, using the latest communications technology, ensuring no need for face to face meetings.  Find your Vital Edge, reignite your business, your career and maybe even your life? A SPECIAL INTRODUCTORY OFFER applies to all responses received.

All enquiries and the initial sessions are FREE.