In the age-old debate about which works best – positively rewarding desired behaviours or punishing non-desired behaviours – we need to be careful that we don’t fall into the trap of making a causal attribution that does not actually exist. We may be observing nothing more than a mere consequence of statistical distribution known to students of statistics as ‘regression to the mean’.

This is described in the excellent book Thinking, Fast and Slow by Daniel Kahneman (p 175), where he describes an Air Force trainer who objected to Kahneman making the claim that rewarding improved performance was more effective than punishing mistakes. His objection was based on his experience. When he positively praised someone for performing a manoeuvre well, on the next occasion the individual inevitably performed worse. On the other hand, when someone did badly, he would blast a condemnation into their ear which, in the view of the trainer, always caused an improvement in performance.  Ergo, negative reinforcement works more effectively than positive. 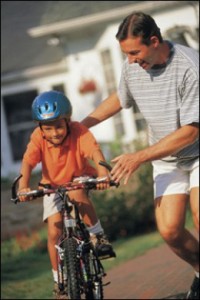 And, so it might seem, on first inspection in this example. That is, until you think about these situations as being distributed levels of performance around a mean. It makes sense that one single piece of outstanding performance is very likely to be followed by one that is closer to the mean than before. Likewise, an extremely poorly executed manoeuvre is more than likely an aberration, and (even without the blast in the ear) is likely to result in an improvement, and a performance closer to the mean on the next occasion.

What the trainer had stumbled upon was a rule of statistical distribution, and not a profound principle of psychological reinforcement theory.

What we do know, however, is that the brain is wired in such a way as to be biased toward negativity.  This is a consequence of our evolutionary journey and is one of the reasons that we have survived as a species.  It was critical, and indeed life-saving at times, for our ancestors to be alert to danger, to be primed to detect predators, to see risks everywhere. Neuroscience demonstrates that our emotional centres are biased toward negative emotions, and, for this reason, positivity does face an uphill battle. It is working against the tide of our emotional make-up, and to overcome the bias (or at least redress it) we need to experience at least a 3 to 1 ratio of positive thoughts or experiences over negative ones on a daily basis.  (for a deeper treatment of this area see the previous post Overcoming the Brain’s Negativity Bias).

Negative reinforcements and punishments have their place in a world associated with danger and risk, but in a world where our safety is less of an issue, and the emphasis is on how well we thrive, grow and develop, the powerful effects of positive reinforcement are in the generation of optimism, creativity, empowerment and confidence.

If you feel that you or members of your management team would benefit from exploring ways to make substantial improvements to personal and collective effectiveness and productivity, please do get in touch.       Simply  submit  your contact details on the Contact Us page and I will be delighted to get in touch for an informal initial chat.

About me:  I enable people in business to operate more successfully.  You may be struggling to implement corporate strategy, you may want to get more productivity out of your teams but don’t know where to start,  or your people may not be having as effective conversations with each other as they could be. I will work with you to enable you to formulate more effective ways of leading, to raise awareness of blockers to successful ways of working, and ultimately to help you to lead more successfully.

Check out this quirky little video. A fun way to listen to some great affirming messages……
Inhale Positivity
Take a deep breath. Inhale positivity and exhale negativity. Surround yourself with successful people. Enjoy the little things in life. Smile at a stranger. Don’t be hasty in your judgement of people. Some people wait their whole life for the storm and never enjoy the sunshine. Great stuff !!!

The entire world is grappling with extraordinary disruption as a result of the coronavirus and every one of us, in on our own unique way, is on our own volatile and uncertain change journey. While it is totally natural to feel anxious and concerned, there is also opportunity in every crisis.

How can you use this time to step back and reflect on where you are going? Can you use the time to plan for the future? What can you learn about yourself from your own reactions to the situation? Can you get yourself more grounded or more organised?  Can you develop yourself and learn new skills that you have been putting off because you never have the time? How can you thrive in this new reality rather than getting mad at what you have lost or being scared by an uncertain future?

There’s never been a more important time to take stock of where you are, and where you going, than NOW!  Act now and benefit from professional coaching, using the latest communications technology, ensuring no need for face to face meetings.  Find your Vital Edge, reignite your business, your career and maybe even your life? A SPECIAL INTRODUCTORY OFFER applies to all responses received.

All enquiries and the initial sessions are FREE.