A great deal of pressure was heaped on the young shoulders of Matt Biondi in the run up to the Seoul Olympics in 1988.  He was one of the United States great hopes for multiple medals in the swimming pool. Comparisons were being drawn with the legendary Mark Spitz who had won seven golds in the 1972 games.    In his first event, the two-hundred-metre freestyle, he finished a creditable third.  Great by most people’s standards, but disappointing for Biondi and the hard-to-please media back home.  The next event was the one-hundred-metre butterfly.  Having blasted into an early lead, and dominated the race all the way, he made an error of judgement on his final stroke. One more stroke squeezed in with a metre to go would have seen him home, but he chose to coast and stretch for the wall instead.  In doing so he was pipped by a fingernail and beaten into second by an unknown swimmer, Anthony Nesty, from Surinam, not a country renowned for swimmers, let alone gold medals. 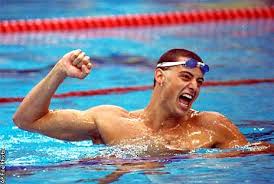 There was much gnashing of teeth and criticism levelled at Biondi from afar. This was not the start to an assault on seven gold medals that the American public expected, and many started to write him off.   There was at least one person who did not, however.  Marty Seligman, the father of Positive Psychology, watching proceedings on his television, had belief, and evidence, that Biondi had what it would take to come back from these disappointments and go on to achieve success.  Seligman had run an assessment programme with the U.S. women and men’s swimming team in the run up to the Olympics that year.  The objective was to assess how each of the squad would perform, especially when under pressure and after setbacks.  Having tested and assigned each swimmer on an optimism vs pessimism scale, as well as on their explanatory style (i.e. the reasons people give for things going wrong), Seligman then created a set of circumstances which simulated defeat for the swimmers during the course of their training.  Each swimmer was asked to put in one of their biggest efforts on their best event.  They were timed by their coach (who was, of course, in on the experiment).  On completion, the swimmer was then told that their time was worse than the actual time they had achieved.   Now, elite swimmers are highly attuned to their timings, and can normally estimate fairly accurately what they have achieved. The level of the ‘failure’ was made sufficiently large to be very disappointing, but not so large as to be obviously wrong.   After a rest period, and some time to absorb the disappointment, the swimmers were asked to do the same event again, as fast as they could.

There was a marked difference between optimists and pessimists in their reactions to the ‘failure’ and, more importantly, in how they performed in their repeat swim.  Seligman observed that one swimmer, assessed as a pessimist, “sat and rocked like a baby in a corner for twenty minutes afterwards”.  Once rested and refocused, and back in the pool, pessimists performed worse.  Their times deteriorated, even lower than their ‘correct’ first swim, some by as much as two seconds, the difference between coming first and last in those events.  Optimists, on the other hand, either sustained their performance, at least as good as they had swum the first time, or, in some cases, they went even faster.  Matt Biondi had been one of those who responded to the disappointment by getting even faster.

This is why Marty Seligman was confident he would bounce back from those first two events in Seoul, and he did just that. Biondi went on to repay Seligman’s confidence by winning all of his next five events, securing five golds to go along with his silver and bronze.

Seligman is one of the great names in modern psychology, and is credited with changing the direction of thinking within the field, with his ground-breaking work on learned helplessness, depression and optimism.    As well as the work done with the Olympic swimmers, he has also undertaken detailed analysis of baseball and basketball teams.  He painstakingly reviewed all interviews, comments and sound-bites given by players and coaches from certain teams over entire seasons and assessed them according to what he describes as ‘explanatory style’.  Explanatory style is key in Seligman’s view, as it predicts so much about how a person will respond to setbacks, failures and disappointments.

The key appears to be to what extent people attribute failure to something permanent, how pervasive it is deemed to be, and whether the reason is felt to be internal or down to something  external.

Let’s take a look at how some of the baseball players and coaches explained defeats.  For one team, the New York Mets, in the 1985 season, responses along the following lines were typical:

So, when the Mets did badly, the pattern of responses that their players made fell into a consistent pattern.  The reasons were typically non-permanent (e.g. it’s just for today), non-pervasive (e.g. it doesn’t happen against everyone we play – it was just these opponents), and external (e.g. it was not our fault, something outside our control happened).

Contrast this with responses given by the St. Louis Cardinals in the same season:

A very different set of responses, I’m sure you will agree.  These explanations certainly do suggest that the coaches and players see the issues as permanent (e.g. we can’t hit), pervasive (e.g. I don’t have the expertise) and internal (e.g. trouble concentrating).

The interesting part of this study happened the following season.  Both the Mets and

Cardinals had disappointing seasons in 1985, the Cardinals just missing out by the narrowest of margins in the World Series to Kansas.  Despite the Cardinals having a more talented team than the Mets (as generally accepted by expert judges in these matters and backed up by all the statistical averages), the Mets bounced back to outperform the Cardinals in the 1986 season, reaching and winning the World Series. The Cardinals collapsed and finished nowhere.  This relative difference in performance was what Seligman predicted based on the analysis he carried out in the previous year.

Seligman’s conviction that optimism, coupled with appropriate explanatory styles, as a huge predictor of success was not confined to the sports field, however.  He took his theory into the board room of one of the world’s largest insurance companies, Met Life. In doing so, he helped transform the insurance industry’s recruitment strategies and revolutionise their pre-conceived notions about the type of natural personality and talent they were looking for.  More detail about how Seligman achieved this can be found in The Vital Edge, where the story is continued.

This is an extract from The Vital Edge, released in 2014 and available on Lulu.com, as well as at the following popular retailer sites…..

“The Vital Edge” takes you on a fascinating journey through the minds of athletes, Olympians, tennis players and more, as you discover insights that will transform your thinking and enable you, your teams and your business to perform at their very best.

About the author: Louis Collins enables people in business to operate more successfully. You may be struggling to implement corporate strategy, you may want to get more productivity out of your teams but don’t know where to start, or your people may not be having as effective conversations with each other as they could be. I will work with you to enable you to formulate more effective ways of leading, to raise awareness of blockers to successful ways of working, and ultimately to help you and your managers to lead more successfully.

Could your organisation benefit from raising the leadership skills of its people? Would you, or members of your management team, benefit from exploring ways to make significant improvements in personal and/or collective effectiveness and productivity? Coaching around the rich field of leadership will help provide the edge that you are seeking in 2014. Coaching has been proven to directly impact the bottom line. Simply drop me your contact details on the Contact Us page and I will be delighted to have an initial discussion.

2 thoughts on “The Power of Optimism”