I’ve just witnessed yet another fascinating weekend of sport, and it never fails to throw up intriguing twists and turns whilst shining a light into the deepest recesses of the human psyche.  Watching people at the very top of their sport perform under the spotlight and scrutiny of millions, not to mention billions around the world on TV, reveals so much about what makes humans tick.

Two very different sports, golf and cycling, and two leaders with what most people considered to be unassailable leads in major events.  One went on to finish the job, while the other, sadly for him, suffered a ‘meltdown’ as he saw the finishing line in sight.   What can we learn from these two events, and what was going on for these two athletes at those crucial moments?

For those of you who were not glued to these events, here is a brief summary.

Adam Scott, an Australian golfer, led the The Open (sometimes know as the British Open), by a very comfortable margin on the final day’s play. If he were to defend his lead, it would be his first ever ‘Major’ triumph.  At one point he held a 6 shot lead, and no-one in the rest of the field was making any serious inroads into his lead. One or two players made the occasional threat, only to falter again at the next hole. Meanwhile, Scott played like the ice-man. He was focused, calm and very much playing ‘in the present’. He was not getting excited and was playing a very ‘safe’ game, staying out of all trouble. With 4 holes to go, he still had a 4 shot lead.  Up ahead of him Ernie Els, the popular and experienced South African with previous Major wins to his name, was quietly picking off the occasional birdie on the back 9 holes, but none of the experts, commentators or crowd, really foresaw what was about to happen.   Scott, who had barely put a foot wrong during the previous 4 days, bogied the last 4 holes.  Els, from nowhere, was The Open champion.  The crowd were stunned. 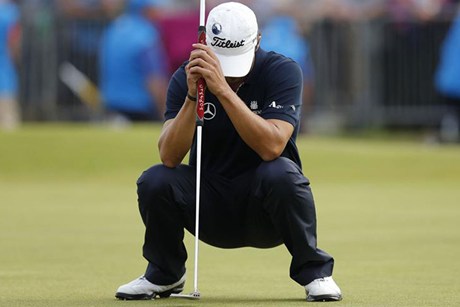 At the same time, about 500 miles further south, history was being made in Paris. Bradley Wiggins, a British cyclist, became the first man from his country to ever win the famous Tour de France in its 99 years history. Wiggins had held the yellow (leaders) jersey from very early on in the 3 weeks long race, and his lead had been considered unassailable for the previous 4 or 5 days.  Only after the penultimate stage, when Wiggins reinforced his lead, did he allow himself the luxury of acknowledging that, barring a disaster, victory would be his in the Champs Elysees. But, he still had work to do on the final day, and his focus was on helping his team-mate, Mark Cavendish, to win the final stage. He was successful in this, setting up Cavendish for a final sprint finish that saw him race to his fourth stage victory in four years in Paris. A short while later, Wiggins stood on the top of the podium to be crowned the 2012 Tour de France champion.

In a recent post I touched on the importance of the Inner Game, in sport, and in life. Success, and staying focused, depends hugely on being able to quieten the ‘inner voice’. Avoiding the twin enemies of success – regret and anxiety – is vital to ‘play your best game’. I have no way of being sure what Adam Scott was experiencing, as his bogey count rose during those final few holes, but I am willing to bet that either regret at the choices he had just made, or anxiety about how he would ‘recover’ and play his next shot (or both), started to occupy his thinking.  He was playing a lonely Inner Game all by himself, in full view of a global audience, and, on this occasion he was unable to come through and take the big prize.

Wiggins’ Inner Game was played to perfection. He allowed himself only a very brief moment of anticipating his victory, before  refocusing his attention on the task of helping his team-mate to a final-day stage victory.

So, what lessons can we take away from the amazing Tour de France victory achieved by Bradley Wiggins and his team?

I suspect any team, whether in business or in sport, will benefit from building these principles into their way of thinking and operating.

I can help you to discover your Inner Game. Learn how to recognise the obstacles and derailers that damage our ability to perform at our best. Discover how to unlock your potential, free from interference.  Simply contact me through the Contact Us page. I will be delighted to have an initial chat about your personal or business objectives.

5 thoughts on “Unassailable Leads. The Agony and the Ecstasy.”