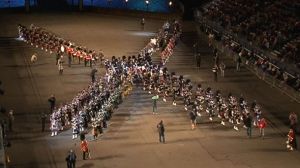 Are humans naturally programmed to serve in the miltary? I was impressed as I watched the movement of people at the bottom of the escalators at Holborn tube the other day. The permutations of possible routes people can take is complex. Down and right to Piccadilly, down and left to Central. Direct from Central to Piccadilly and vice versa. Up from the blue line and likewise the red. 6 different routes in a relatively small space and hundreds of people all in full flow. I did not spot one collision. People seemed to lock on to their destination point and in a feat of collective co-ordination and uncanny, and apparently unwitting, mutual understanding, they weave and stride, eyes fixed, focused and unerring, slide past one another and disappear into the next tunnel or up the escalator. All of this achieved while many are locked away in their i-pod world or screening their texts and emails on blackberries and i-phones. I have been to the military tattoo at Edinburgh Castle, I have even been in a para-military organisation (steady!! – it was the Boys Brigade). I have trained for weeks for Drill Parades and was always secretly proud of my grasp and timing when it came to the ‘slow march’. But, having watched untrained commuters, from all cultures and countries, randomly thrown together in a tube station, perform a graceful and synchronised drill pattern with absolutely no rehearsals, I am wondering if we are indeed the descendants of a long lost military tribe with a natural instinct for co-ordinated and synchronised precision. Just a thought!