I’m getting more than a little concerned about the world’s changing attitude toward ‘risk’. 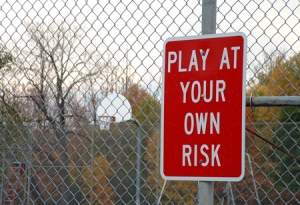 A fundamental part of our biological makeup, and a reason for the way our limbic systems work the way they do, is that we are well equipped for surviving. The very fact we are around today, writing and reading this post, is evidence of our species’ success in navigating millenia of ‘survival’ challenges. Being able to assess risk, and make decisions based on the available information, is key to that continued success. Certainty and absolute prediction do not exist in nature. The best we can do today is build up banks of data based on past events, use super-computers to model trends, and use experts to ‘predict’ based on probabilities. And, even then, it is remarkably difficult to get it right. The US Presidential elections were being predicted by political analysts and pollsters using many different indicators of what has happened (or not happened) in the past. But, they did not all get it right. Hurricane Sandy was being tracked minute by minute, modelled by the most powerful computers, and its likely course predicted by the best weather forecasters, but no-one could be certain exactly where, and how it would strike, and with what level of ferocity.

Now, I like to think that, as humans (who are inherently wired to understand probability, risk and prediction), we are tolerant and acceptant of the fact that getting predictions absolutely correct is simply not achievable.  But, I fear I am naive in this belief. I sense a growing intolerance of lack of predictability. “Those so-called ‘experts’ are paid good money, so they darn well should get it right!”  This typical refrain suggests that we may be losing our biological and innate capacity to be effective risk assessing organisms, too keen perhaps  to devolve responsibility for ‘getting things wrong’ to others.This worrying development was highlighted recently by the astonishing imprisonment of 6 scientists who were pilloried for failing to predict the occurrence of an earthquake that struck the town of L’Aquila in Italy. Hundreds died in the disaster. The case was generally badly reported in the mainstream press, so you might want to have a look at this blog post for more detail of what appears to have happened, behind the scenes, and in the lead up to the earthquake.What was seriously lacking in the whole sorry affair was straightforward and honest leadership.  The Abruzzo region of Italy, in which L’Aquila lies, has been subject to numerous shocks and tremors over many years (several thousand since late 2008). People in the region are no doubt familiar with living with this reality, and, of course, the constant threat of the ‘the big one’. 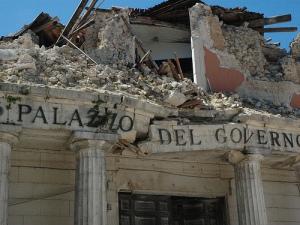 The officials in L’Aquila used the words of the scientists, which did of course say that there was nothing to suggest a ‘big one’ was imminent, to go further and minimise the concerns. One of the scientist’s minuted statements said “It is unlikely that an earthquake like the one in 1703 could occur in the short term, but the possibility cannot be totally excluded.”  The conditions were translated by one of the government officials on Italian TV as “certainly normal” (which) posed “no danger”.  When the earthquake struck 6 days later, the government officials stepped aside to avoid the bullets, leaving the scientists firmly in everyone’s sights.  Political survival rather than leadership, ownership and responsibility became top priority.

Faced with a situation where people are fearful of something happening, especially one that is out of their own control, calls for courageous and honest leadership. For an excellent argument on this subject I recommend Ronald Heifetz’s, Leadership Without Easy Answers.

1. Listen to people’s concerns and find out where they are at.  Suppressing issues, or engaging in a game of “everything will be alright” does no-one any good. It simply encourages a parent-child relationship which will come back to bite when things go wrong.  This may buy officials in government (or managers in business) time, and while things do not get worse, people may feel comforted by the words. It does nothing however to help people prepare themselves and make their own decisions, and as such is actually doing them a massive disservice.

2. Acknowledge the fear.  Dismissing the fears, and brushing them away is not good leadership.  Good leaders show empathy, but ultimately ensure that people understand that they have choices. They can choose to live with the fear, or, if it is possible to do so, they can change their circumstances, either to move elsewhere, or make preparations to best deal with events that may happen. Either way, good leadership puts at least some of the work back onto people.

3. Orchestrate conflicting perspectives.  A key component of a successful leader’s approach is to bring different perspectives and views together in a way that encourages balance, reason and arbitration.  Done well, this will encourage people to take responsibility for weighing up available information to reach their own conclusions.  What happened in L’Aquila was underhand and patronising, and certainly not good leadership. The authorities in this case ‘used’ expert evidence to manipulate the message, and suppress discussion and ownership.

Of course, all of this will no doubt involve leaders in facing up to some hard truths, and  lead to them making some tough decisions and prioritisations. But, no one said leading was easy. However, it is important that the leading process involves people in understanding the role they have to play too. If none of the work is returned to the people, if they do not feel ownership and responsibility, then the leader has not done their job, is unlikely to succeed and will no doubt be ejected and replaced at the earliest sign of failure.

Leaders must not go on encouraging society to expect greater and greater certainty and predictability in a notoriously unpredictable world.  It is misleading, disingenuous and damaging our ability to solve problems.

In today’s world, with so many social, economic and ecological challenges, we need people throughout our societies (in businesses, organisations and academia) who appreciate risk, who are prepared to take chances based on the known risks, and who are not scared to fail or get things wrong. The greatest scientific discoveries and creative breakthroughs have come about from people trying, failing, refining and retrying. It is incumbent on us all, but especially on those with the privilege to hold leadership positions, to encourage a culture where it is acceptable to try and fail. To reward attempts at innovation and creativity by everyone (not just people paid to work in research labs). And finally, to foster a balanced, and ultimately, more natural acceptance of the existence of risk and lack of certainty in our world.

[ For more on this subject you might also enjoy a previous post I wrote Are you a popular Leader? Then what are you doing wrong? ]

If you want to maximise your effectiveness as a leader or develop the leadership skills of your people, then please do get in touch. Simply send your details through the Contact Us page. I will be delighted to discuss further with you how we can work together.

7 thoughts on “Leading with uncertainty”